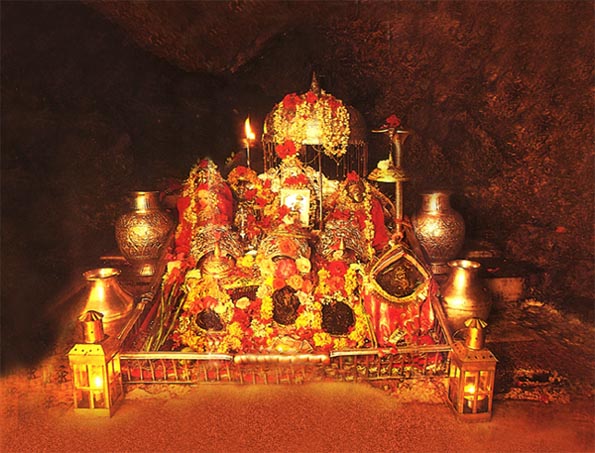 The Mata(Mother) Vaishno Devi is regarded as the combined incarnation of the goddesses Kali, Laxmi and Saraswati. Thousands of people who are devoted to the goddess make the Vaisho Devi Tour in the months of September and October each year. It is believed that this journey can only be successfully undertaken by those pilgrims whom the goddess has called to visit her. People who have not received her holy summons can try as hard as they like, but will never be able to reach the temple without her explicit blessings. The truth is that it is located at a far flung place far away from civilization and in the olden days it must have been near inaccessible.

The temple of Vaishno Devi is located about 110 km and northwest of the city of Jammu in the Indian State of Jammu and Kashmir at a height of 5, 300 ft. inside a cave in a hill. You will change roads after the city of Patnitop to head for the cave which bears the temple of the goddess. The ride from Jammu is very scenic and beautiful. A number of picnickers can be seen en route. There are special camps along the way specially catering to the pilgrims who are headed for the temple.

The closest railway station and airport are located at Jammu and you have to make the remaining trip by road. You will in the tourist season find that you are a part of convoys of jeeps and cars headed in this direction. Many buses also regularly ply the route and can be cheaper than hiring out the full taxi. Once you get to the end of the road, the long climb up the stairs begins. Some palakis or hand carried chairs are available for those who cannot climb up on their own. Some mules and ponies are also available for those who fancy a ride. The popular belief is that you earn more merit in the eyes of the goddess if you climb up the hill on your own steam. So it is not uncommon for people to go up by themselves and come down in a palaki or a pony. Of late it is possible to actually get a helicopter ride right up to the entrance of the cave. This is naturally the easiest and most expensive way to get to the temple of Vaishno Devi.

The temple of Mata Vaishno Devi is located inside a cave. The entrance to which is rather slippery and small. Getting through the opening can be quite an ordeal for claustrophobic people. The pilgrims have great faith in the goddess and the line needs to be kept moving because of the sheer number of people who are waiting in the wings to enter the temple cave. The actual darshan or the time spent in the presence of the goddess in the cave is rather short and can seem unsatisfying. So be alert when you enter the cave to soak up all that you can before you are ushered out again.

The red cloth with golden border which is called her “Chunri” is carried back with people along with the “Prasad”. These are then tied to vehicles such as cars and scooters to get her constant protection. It is also a way for the driver of the vehicle to proclaim that he has made the difficult journey to the temple and back with the blessings of the goddess. While taking the helicopter in and out is the easiest way to do this tour, if you are more religious try and climb at least part of the path to feel good about journey.