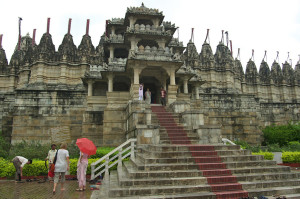 Ranakpur, City Of Temples, located 96 km from the enchanting city of Udaipur, situated on the banks of River Maghai. Ranakpur is renowned for some marvelously carved Jain temples in amber stone Ranakpur is one of the five holy places of the jain community. A Serene Destination With No Jostling Crowds. Ranakpur is visited by many tourists for its magnificent temples. Ranakpur is a holy city, which abounds in beautiful temples. The history of the intricately carved temples goes back to the 15th century when Ranakpur was ruled by Rana Kumbha.

Ranakpur Tourist Attractions
Ranakpur is one of the five holiest places of the Jain community, Tourists from all over the world come to Ranakpur to see its fascinating temples, which are high on beauty quotient. The temple is said to have been built by Seth Dharna Sah (a Jain businessman) with the aid of Rana Kumbha, who ruled Mewar in the 15th century. Ranakpur got its name after the name of the Rajput Monarch and likewise the temples. The temple complex is positioned in an isolated valley on the western side of the Aravalli Range. The Jain Temples of Ranakpur are certainly creditable for their splendid architecture. This temple is wholly constructed in light colored marble and comprises a basement covering an area of 48000 sq feet. There are more than 1400 exquisitely carved pillars that support the temple.

In the complex, there are several temples including Chaumukha temple, Parsavanath temple, Amba Mata Temple and Surya Temple. Amongst all of them, Chaumukha Temple is the most important and as the term Chaumukha suggests, this temple is four-faced. Chaumukha temple is dedicated to Lord Adinath, who is the first ‘Tirthankara’ of the Jains. The Temple structure is highly compound having four different doorways to get into the chambers. These chambers ultimately take you to the main hall where the image of Adinath is positioned. The temple is a masterpiece of architecture and boasts of not less than four additional shrines. It has 24 pillared halls with 80 domes that are supported by 400 columns. The upper and lower parts of the domes are linked by brackets that have deities’ sculptures. Above all, you would be amazed to see at a height of 45 feet engraved nymphs playing the flute in various dance postures. Each column is intricately carved and it is surprising to know that no two columns have the similar design

Parshvanath Temple
The marble temple of Parshvanath is also known as the ‘Patriyon ka Mandir’. The temple, which is famous for its black stone image of the Jain saint Parsvanath was built in the mid 15th century. Surrounded by high hills, this beautiful temple is also famous for its pierced stone windows with ornamental designs. Besides, there are many other beautiful temples and places you can visit when you travel to Ranakpur, which can be an amazing experience. Another temple worth visiting is the nearby sun temples an 8th century A.D. temple Dedicated to the sun god. The temple has polygonal walls, richly embellished with carvings of worriers, horses and solar deities riding splendid chariots.

Sadri: Situated approximately 8 km from Ranakpur is Sadri. The main draws of Sadri include a few magnificent temples, the oldest of them being the Varahavtar Temple and the Chintamani Parasvanath Temple. There is also an old dargah, Dargah of Khudabaksh Baba here. Situated at the base of the Aravalli hills, these mango orchards were laid out in the late 19th century by the wife of Maharaja Takhat Singh of Jodhpur. The orchard has a lots of shady trees as well, and under them are several cottages with all modern amenities. The cool and peaceful atmosphere invites a large variety of exotic bird life. The guests can spend several peaceful hours watching birds or generally relaxing.

Muchhal Mahaveer: Muchhal Mahaveer is a temple situated in the Kumbhalgarh Sanctuary, and is approximately 5 km from Ghanerao. The temple houses the statue of Lord Mahavira with a moustache. Two elephant statues, superb examples of architecture, stand as guards on the gateways of the temple. You can also take a peek at the tribal life of Rajasthan by visiting Garasia tribal villages situated nearby. The Jain Golden Temple in Falna, a small town in Rajasthan has a unique attraction worldwide. It is the first temple that has been constructed by the people of the Jain community. The specialty of the temple is that, from the Falna town itself about 90 Kg. of gold was donated by the ladies of the Jain community for the idolization of temple dome and Lords idol.

Ghanerao: Ghanerao is well known for a number of Hindu temples. The most impressive temple is that of Gajanand. The temple houses a life-size statue of the goddesses Ridhi and Siddhi. On the either of the statue are the images of Lord Hanuman and Bhairon Baba. Then there is a temple of Lord Mahavira, dating back to the 10th century. The town also has a castle, now converted into a hotel.

Desuri: The town of Desuri is approximately 16 km from Ranakpur. It is famous for a number of temples. The most remarkable ones are those dedicated to Lord Shiva, Lord Hanuman and Navi Mata. There is also an old mosque here that is worth a visit. Nearby Desuri, situated in the hills, is a temple dedicated to Parsuram Mahadeo.

Narlai: Lying approximately 6 km from Ranakpur, Narlai is situated at the base of a hill. Narlai is known for a number of Hindu and Jain temples. One of the temples is that of Adinath, the Jain first tirthankar. An ancient temple, it has beautiful frescoes on the ceilings of the outer mandap. A perfect place for serene walks, Narlai also houses a good baori (step-well). Rising from a prominent ridge, 1914 meters high from the sea level, this mountain fortress in the wilderness, is the principal fortification after Chittaurgarh. This massive fort encompasses a 36 km long wall, has seven majestic gates and seven ramparts one within the other. Rounded bastions and soaring watchtowers, offers a superb birds eyeview of the countryside surrounding the fort. Most of the ruins within the fort, are of temples dating back to the Mauryan period and of Jain temples of various periods.

Ranakpur Climate
Ranakpur weather is that of a tropical type. The summers are quite hot with the average temperature falling in the range of 42.0° C (max) to 22.0° C (min). The climatic conditions of Ranakpur, Rajasthan in winters are only a little bit colder. The average temperature is somewhere between 20.0° C (max) to 10.6° C (min). The monsoon season does not receive much rainfall. The climate of Ranakpur experiences annual total rainfall of around 55 cm only. The best time to visit Ranakpur is during the period of September to March.

Shopping In Ranakpur
Being a small village, Ranakpur does not offer much for shopping. However, you can go for shopping in Udaipur, which is located around 98 km from Ranakpur. A wide variety of handicrafts such as jewelery, paintings, wood craft, leather craft, blue pottery, semi-precious gems etc are available in the bustling bazaars of Udaipur.

Accommodation In Ranakpur
If you are tilted towards luxury, then stay at the heritage hotel Maharani Bagh in Ranakpur. Offering luxuriously appointed rooms with best of facilities, the hotel was once the abode of the Maharani of Jodhpur. Falling into different categories, there are several other hotels in Ranakpur. RTDC Hotel Shilpi. Dharamshala also provide comfortable accommodation.