The old and historical city of Dwarka is located in the state of Gujarat near the coasts of the Arabian Sea.  One of the Pilgrimage sites in the Char Dham Yatra, ‘Devbhumi Dwarka’ or simply Dwarka is one of the major Hindu Pilgrimage destinations that every day gathers hundreds of tourists and pilgrims.  It is also one of the pilgrimage towns among the seven ancient towns or the ‘Saptapuri’s. Being one of the major Hindu pilgrimage sites, the place was once renowned as the kingdom of Lord Krishna.  The main temple in Dwarka is that of Sri Dwarkadhish.  Lord Krishna is worshipped here as the king of Dwarka and hence the name follows the same. A distributary of the Arabian Sea, Gomti river connects the mainland with the sea. The name ‘Dwarka’ refers to ‘The Gateway to Heaven’ or ‘The Gateway to Moksha’.  Hindus believe that a holy bath in the Gomti river followed by the darshan of Dwarkadhish free one from all material bondings and help in attaining Moksha. Apart from Dwarkadhish Temple, there are many other temples and shrines in and around the city to explore.

According to Hindu mythology, Dwarka was once the capital of Gujarat. After defeating his maternal uncle Kansa, Krishna constructed the golden city of Dwarka with the help of Lord Vishwakarma. Later in his life, Krishna shifted from Mathura to Dwarka with his consorts and ruled the kingdom for the rest of his life. Legends say that soon after Krishna left the material world, the Yadavas (or the descendants of Krishna) fought among themselves and the entire city got immersed in the Arabian Sea. It is said that the original temple of Dwarkadhish was constructed by the Great-grandson of Krishna, Bajranav over the original residence of the Lord.  The temple faced numerous destructions and reconstructions during the Mughal Era. Though the current temple was built in the 16th century in the Chalukya style,  Archaeological evidence proves that the original shrine is 2000 to 2500 years old.

The Jagat Mandir or Dwarkadhish Temple is a 78 m high limestone temple that is supported by 72 pillars at the ground level.  A flight of stairs takes one to the front yard of the stone-carved temple that passes through a small shrine of Lord Ganesha. The mesmerizing carved pillars and intricate designs at the walls make way for the pilgrims towards the main sanctum of Dwarkadhish. The long vestibule with steel rails allows one to have a Darshan of the black idol of Dwarkadhish in the sanctum. The elongated lobby at both of it ends witnesses the deity of Dwarkadhish and his mother Devaki.  It appears as mother Devaki is having a continuous eye oven her son!  Once done with the darshan of the Lord, one can move on to the backyards of the temple. The temple backyard has a series of shrines dedicated to the consorts of the Lord, viz. Rukmini, Satyabhama, and Jambavati. Every evening, a Dhwaja or flag made from 52 yards of cloth with the symbols of sun and moon is hoisted at the peak of the temple. It is said the symbols on the flag can be clearly observed from a distance as long as 10 km.

Major festivals celebrated at the temple

Though a large number of festivals are celebrated at the temple throughout the year, the major festivals to name include Holi and Krishna Janmotsav.

Other festivals at the temple list Makar Sankranti, Tulsi Vivah, Dipawali, Rathyatra, Navratri, Jhulan Utsav, Ramnavami and Annakut. As the month of Kartik is considered sacred by the Hindus, the deity it is also decorated beautifully throughout the holy month of Kartik.  After keeping fast for the whole day, devotees offer ghee lamps or Diyas to the Lord.  They also sing and chant the holy names of the Lord in the evening.

Though the opening time slightly varies depending upon the major seasons of the year, the temple gates stay open from 6 am to 12 pm in the day and from 5 pm to 9 pm in the evening.

Other pilgrimage sites in and around Dwarka 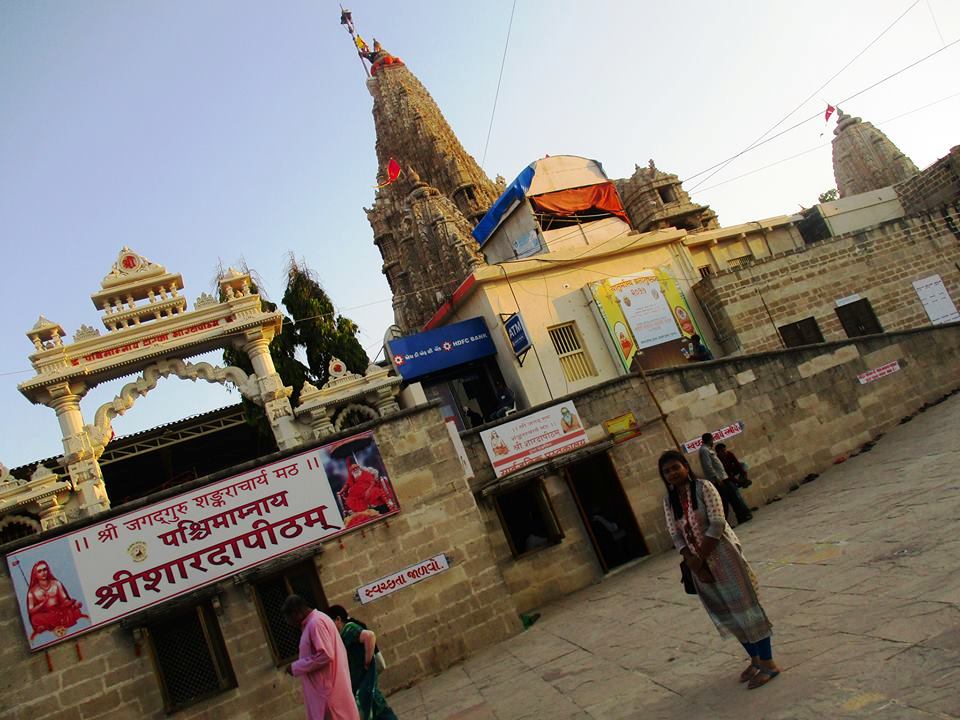 Located at a distance of 2 km’s from Dwarkadhish Temple, Rukmani Mandir is dedicated to Rukmani Devi, the consort of Lord. After the marriage of Lord Krishna with Rukmini, sage Durvasa visited the newlywed couple to bless them.  On arrival, he asked the couple to show him around the city of Dwarka.  After walking some distance, Rukmani Devi got tired and thirsty.  The Lord tapped the ground with his toe from where a spring of Ganga appeared. This made Durvasa angry and he cursed Rukmani to stay aloof from Krishna for the rest of her life. Thus, this temple came into existence where Devi Rukmini stayed away from Krishna’s residence and led her life in penance.

A 2 km ferry ride from the north coast of Dwarka takes one to the island of Bet Dwarka. Bet Dwarka is considered to be one of the original fragments of the ancient city of Dwarka. It is surrounded by beautiful beaches and stone pathways that lead to some famous temples of the island.  Few important temples to mention include Sudama temple, Hanuman temple, and Keshavraj Temple. The main attraction is the Sudama Temple which portrays the friendship of Krishna and Sudama. The epics elaborate the divine bond between the King of Dwarka and a poor Brahmin Sudama and how Sudama’s misery came to an end after meeting his friend in Dwarka.

One of the most popular shrines around Dwarka is Nageswar Mahadev. Being one of the twelve Jyotirlingas, the Shiva temple is located at a distance of 20 km’s from Dwarkadhish Temple. The 80 feet tall silvery idol of Lord Shiva in the temple premises can be perceived from a far distance by the travelers. Lord Shiva along with Devi Durga is worshipped here at a lower chamber in the sanctum. Though a large number of devotees and tourists visit the shrine every day, the yearly occasion of Shivratri wrinkles many thousands of people at its premises.

A 15 minutes’ drive from Dwarkadhish Temple will fetch you at the concrete pavements of a large pond viz. Gopi Talav. According to the Hindu mythology, after the battle of Mahabharata, out of pride and ego Arjun boasted of his courage and valor. In order to teach him a lesson, Krishna asked Arjun to accompany the damsels of Vrindavan (Gopi) who came to visit Dwarka back to their home. On the way to Vrindavan, Arjun and the damsels were attacked by the tribes of Kaba. After a fierce battle, Arjun was defeated and out of shock and insult, the Gopis submerged them in the pond.

The soil around the pond is very smooth and fine and is popularly referred to as Gopi Chandan. Hindus especially Vaishnavas consider this soil sacred and use the same to apply tilak on their body. The surroundings of the water body offer a serene and peaceful atmosphere to the visitors and pilgrims who consider Dwarka incomplete without a visit to the pond.

Other places of interest include in and around Dwarka include Gomti Ghat, Bhadkeswar Mahadev Temple, Sudama Setu, Light House, Geeta Mandir, and Sunset Point.

Quite a number of hotels and homestays are available near Dwarkadhish Temple for a peaceful stay. Several ashrams and Dharamshala are also there who offer a stay at cheap rates.

Ample eating options are there in Dwarka. Being a pilgrimage center and a vegetarian state, a major part of Gujarat offer vegetarian food, Dwarka being no exception.

Dwarka is well connected by buses from major cities like Vadodara, Ahmedabad, and Jamnagar.

The nearest airport is Jamnagar from where both taxi and buses are available to reach Dwarka.

Dwarka has also a railway junction that connects major cities of the country like Mumbai, Jaipur, Kolkata, Delhi, and Pune.

Read more content related to this
Char Dham Yatra: The Gateway to Salvation

When Shiva stands tall: the top 10 tallest statues of Lord Shiva in India 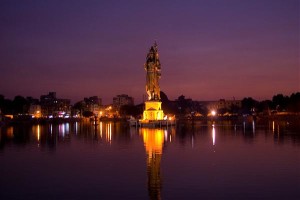 There are three main Gods in the Hindu pantheon- Brahma, Vishnu, and Shiva. While Brahma is known to be the Read more

Exploring the sacred and the holy with pilgrimage travel in India 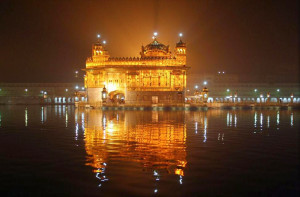 India is truly a land of diversities. People are of various ethnic origins, races, who speak in different types of Read more

Pushkar travel guide – things to do in pushkar 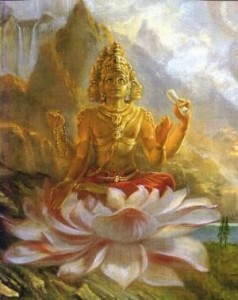 Pushkar is a small town set on the banks of the holy Pushkar Lake, for a devout Hindu Pushkar is Read more