Several scriptures including the Vedas have inferred the importance of Sun god in the mythological history of India. Epics like Ramayana and Mahabharata mention numerous occasions when the Sun God was worshipped for victory and prosperity.

Sun is believed to be the main celestial body among the nine planetary bodies. Not only in history but also the practices of worshipping the Sun God and Navagraha are still prevalent in many parts of India as well.

Since time unknown, numerous architectural beauties of Sun Temple have also been constructed by the Indian Emperors as a mark of honor to the Sun God.  These timeless elections still stand strong to their roots and lines. This post is dedicated to a short list of 7 temples that include some of the well-acclaimed Sun temples of India.

The Konark Sun Temple was constructed by King Narshimhadev I of Ganga dynasty. Being very close to Puri, this UNESCO World Heritage site since 1984 is one of the prime attractions in Odisha. The 13th century stone architecture was constructed in the shape of a giant chariot driven by seven horses. Made of black granite and red sand sandstone, this architectural wonder has faced many natural disasters and foreign invasions.  There is a museum adjacent to the temple premises where the remaining Sun temple is put on a display. A light and show event is also organised every evening that enumerate the spiritual and historical significance of the temple

At a distance of 130 kilometers from Guwahati Surya Pahar near the Goalpara town of Assam is a popular archaeological site. Past excavations from the same have retrieved relics and artifacts related to Hinduism, Jainism and Buddhism. Surya Pahar means ‘Hill of the Sun’. Though surrounded by many unknown facts, the hill was once a major place of worshipping Sun God. Many relics supporting the same have also been restored from the site.  Apart from these, a large number of Shivalingas have also been reinstated from the site that points out the importance of Shaivism in the region in past history.  With its rich and timeless excavations, Surya Pahar has become a popular destination among the nomads visiting Assam. 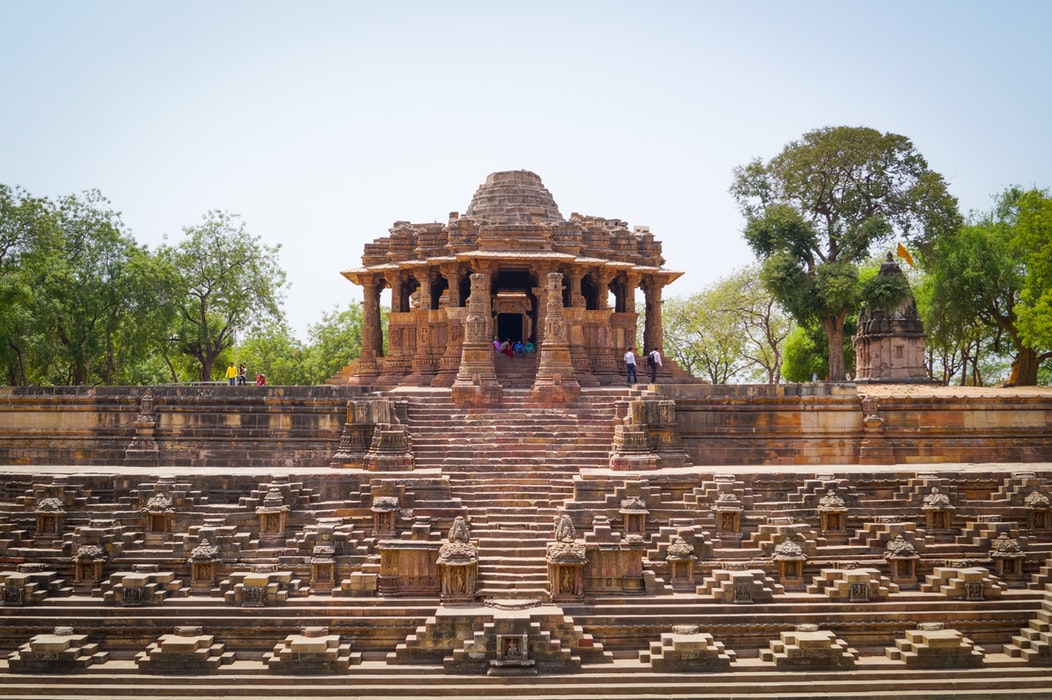 Yet another fascinating architecture built by the Chalukya dynasty is the Modhera Sun temple near Ahmedabad.  The sandstone beauty was elected on the banks of river Pushpawati in 1026 CE.  The temple is known for its intricate pillars, facades, and a gala step well that lay within the premises.  The stepwell is named Surya Kunda and was used to store water in earlier times during the hot days of the year. Every year, Gujarat Tourism celebrates a 3-day festival at the Modhera temple during Makar Sankranti that gathers hundreds of tourists across the country. Its nearby attractions include another stepwell called Rani ki Vav at Patan which is another architectural wonder near Modhera.

Martand Sun temple near Anantnag is located amidst the panoramic valleys of the Himalayas in the state of Jammu and Kashmir. The limestone temple was constructed in the 8th century by King Lalitaditya of Karkota dynasty. Though now in its last ruins, the temple was once located in the highlands of Anantnag from where the entire valley could be perceived easily. The temple architecture demonstrated an amalgamation of Indian, Chinese, Roman and Greek designs. The temple grounds have been declared a heritage site long back and are also currently utilized for shooting of Bollywood films. The serene atmosphere of the temple among the high hills of Himalayas makes it a major attraction in Anantnag.

The district of Thanjavur in the state of Tamilnadu hosts another Sun temple of Dravidian style and architecture named Suryanar Kovil. The erection dates back to the 11th century and lists among one of the nine Navagraha temples in Tamilnadu. This is the only temple where each of the Navagrahas has separate shrines within the premises. The Sun is worshipped here along with his two consorts, Usha Devi and Pratyusha Devi. Hindus believe that Lord Shiva has blessed the Navagrahas here with special powers to bless their own believers.

The oldest and largest Sun temple of Gujarat, Navlakha temple stands near the historic city of Porbandar. The temple was constructed in the 11th century by the Jethwa rulers of Gujarat. Since an amount of 9 lakh rupees was expensed in constructing the shrine, it derived its name of Navalakha meaning ‘Nine lakhs’. The temple has a large intricate base with carved pillars. Though a major part of the temple has been devastated over time, the styles of the Solanki period can still be observed in its decors. It’s pattern and styles highly resemble those of Modhera and Somnath temples. The temple premises also host a 10th century Ganesh temple.

Though very recently built in 1988, the Sun temple of Gwalior was constructed in the same pattern as that of the Konark Sun Temple. The temple architecture combines the beauty of white marble and the red sandstone that stands amidst a lush green garden. It was constructed by the famous Industrialist GD Birla and is one of the famous pilgrimage sites in Gwalior.