Mysore travel guide – tourist places in Mysore:
Mysore is a royal heritage city in the southern part of India which is located in Karnataka. It is the second largest city of Karnataka after Bangalore which is also the capital city. Mysore is about 150 Kilometers southwest of Bangalore. The anglicized version of Mahishuru is Mysore.  As per ancient mythology there was a famous demon called Mahishasura and he dwelled in this city. This is how the city was named after Mahishasura and anglicized to Mysore. 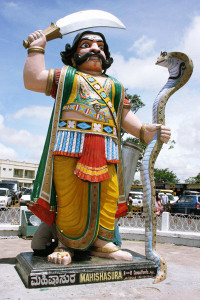 The city is located around the foot hills of Chamundi hills. Even before freedom of India when the princely states of India were not formed, present Karnataka was earlier known as State of Mysore. With this, one can imagine the city’s history and its importance. The local language of Mysore is Kannada, but one still can find a large number of people speaking in Hindi and English fluently. The city is famous for several things like Mysore Pak (A famous sweet dish), Mysore Mallige (Jasmine flower with great fragrance), Mysore Peta (A traditional turban of Karnataka made out of silk) and famous Mysore silk sarees.

Mysore is also renowned for the annual festival of Dushhera that is held during the nine days of Navarathri. During this time, the city attracts a lot of tourists from across the world. In the present times, the city is also flourishing as IT hub, as there are numerous software companies emerging in the city. The city is overall just two and a half hour drive away from Bangalore.

Mysore enjoys a beautiful climate where summers are not unbearable and winters are not too cold. Located on the foot hills of Chamundi hills to the west, it encompasses Western Ghats. The city has three main seasons namely summers, winters and monsoons. The average temperate during summers ranges from 19 degree centigrade to 35 degree centigrade accompanied by a few thunderstorms occasionally. Summer starts from the month of March and ends in May. During winters, the city experiences a temperature of 16 degree centigrade to 31 degree centigrade. Winters are generally seen from January to February. The city receives rainfall from both south-west and north-east monsoon. The ideal time to visit the city is from the month of September to December.

Mysore, the city of glory and grandeur is the capital of Wodeyar rulers. The city was once ruled by the famous Wodeyar. This is a place with rich heritage, marvelous palaces, great gardens, sacred temples and marvelous buildings that has always attracted tourists from all over the world. Mysore city and surrounding has so much to see that the list goes on and on. Some of the main attractions include:

Since Mysore was rich and the most popular city in south India, it was invaded many times. The palace was built four times at the same place. Earlier, it was built out of just mud and wood, but due to fire breakout during the marriage of Maharaja Chamaraja Wodeyar’s eldest daughter in the year 1897, the palace was greatly damaged. Post this accident, the famous English architect Henry Irwin took charge of the reconstruction of this palace and rebuilt it again at a cost of 41 lakhs (funded by Wodeyar family) which completed in the year 1912. 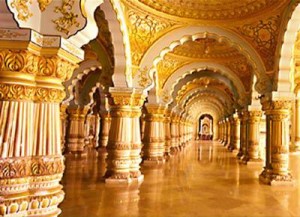 The palace is a true marvel in its own style. The towers of the palace are built up by gold, walls are covered with extraordinary paintings and the flooring is made of out of high quality marble and granite. The palace has displayed a wide range of carpets and ornaments that were used by the royal family. There is a big garden in the front which is well maintained and is a delight to watch. There are even cannon place in the front and temple in the premises. The main gate of the palace is called the elephant gate and that leads straight to the center of the palace.

The palace incorporates a vast collection of dolls, ornaments, royal armory, traditional dolls of nineteenth and twentieth century. The collection also includes a wooden howdah (structure placed on elephant to carry people) that has about 84 Kilogram of gold in it. The world famous Dusherra festival is hosted at this palace and the famous elephant ride during this festive occasion starts from this palace. The best part is that the royal palace is still in the custody of Wodeyar family and the royal family dwells in the here till date. Some other palaces of Mysore include Jagamohan Palace and Lalith Mahal Palace.

Some of the excellent tourist attractions in Mysore include:

Mysore is famous for sight-seeing and shopping of some authentic handicraft made out of sandal wood. One can also shop fine silk and traditional turban made out of silk. The city is also known for silk saris and famous sweet called Mysore Pak. All those who love shopping can have a great time in this city.

One can really have a great time visiting Mysore with the family and can take a lot of cherished memories back home. So, if you also wish to enjoy and spend some quality time with your family, simply plan a visit to Mysore.

Wed Aug 30 , 2017
Share on Facebook Tweet it Pin it Share it Email Shimla travel guide – tourist places in Shimla Shimla is one of the most beautiful hill stations in India and is the capital of Himachal Pradesh.   This city was earlier known as Simla, but know being popular with the name […] 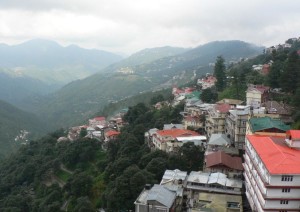