Bharmour is situated 65 kms from Chamba and 80 kms from Dharamshala at an elevation of 2,195 mts above. Bharmaur is located in the Chamba district below the high mountain ranges of the Himachal Pradesh. The trek to Manimahesh commences from Hadsar which is just 17 kms from Bharmour. Bharmour is well connected by motor-able roads with major towns of Himachal Pradesh. Bharmaur is located 17 kms before Hadsar and 31 kms before Manimahesh. 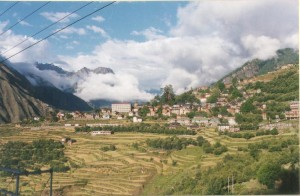 Apples are grown in large amount in the Bharmaur region. Bharmaur is inhabited by Gaddis who reside exclusively on the snowy ranges which divides Chamba from Kangra. Gaddis are semi-nomadic and partial pastoral tribes; they stay at Bharmaur in summers and move to lower areas in winters. Bharmaur is pleasant in summers and the climate is salubrious, but the region receives heavy snowfall during winters. There are many temples in Bharmour which dates back to 8 th century and the continued existence of these sacred shrines reveals about the significant wealth and material possessions of the country. Bharmaur is well connected by motorable roads with major nearby towns. Jeeps, taxis and mini buses are available to Bharmaur.

The history of Bharmour can be traced back to the 6th century when Meru a ruler from Ayodhya and his first prince Jaistambh defeated the Ranas to settle down in the upper Ravi valley. It was then called Brahampura. The name gets its origin from the Brahamini goddess temple which is situated there.

According to the locals, Brahamini Devi was living with her son who was very fond of his pet birds. One day he found them killed by a peasant which shocked the son to death. The mourning also led to the death of Brahamini Devi. The villagers built a temple in memory of the trio.

Several decedents of Meru ruled Brahampura. The empire was later expanded by Sahil Vaman by conquering the lower Ravi valley. The land also owns its pride for being the home of a set of tribes called Gaddis who are respected for their honesty, friendliness and peaceful lifestyle.

Chaurasia Temple or Bharmour temple is centrally located in the Bharmaur town and it holds immense religious importance. The name of the temple is derived after the 84 shrines built within the periphery of Chaurasia Temple, as Chaurasi is a hindi word for no. 84. The beautiful shikhara of Manimahesh temple dominates the square. A giant statue of Nandi in polished brass stands before the temple. It is believed that when 84 Siddhas were passing through this region to Manimahesh, they fell in love with the calmness if this place and reconciled to meditate here. 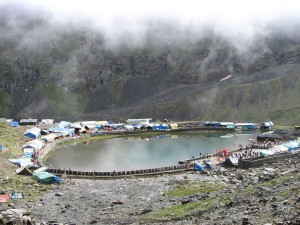 The sanctified water of the Manimahesh Lake is the centermost attraction of the place. Every year thousands of devotees visit this sacred place dedicated to Lord Shiva. A sinner turns into a holy man and a holy man turns holier by taking a dip in the holy water of Manimahesh Lake. Perched at an elevation of 4080mts above sea level Manimahesh Lake offers invigorating view of the reflection of Manimahesh Kailash peak. 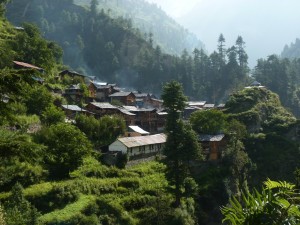 Kugti is the last inhabited village of Bharmaur and it is situated near Kugti Pass (5,040mts). Kugti is located on an intricate track from Bharmaur to Keylong. Rest house at Kugti widens the scope for night halt. The famous Keylong Wazir Temple is just 2km away from Kugti. The trekking path affords splendid views of coniferous forests and snow laden Himalayas. 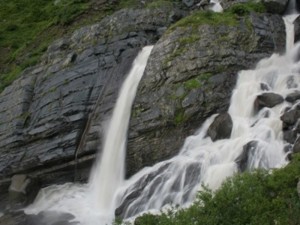 Dhanchho is also written as Dhanchoo. It is the mid-point of the trek to Manimahesh. Dhanchho is perched at an elevation of 2,440 mts above sea level at a distance of 24 kms from Bharmaur. A 17km drive from Bharmour to Hadsar and then trek of 7km from Hadsar will lead you to the scenic Dhanchoo. Dhanchho waterfall is perfect place for picnicking.

Hadsar: Hadsar is a picturesque spot from where the trek of 14 km to Manimahesh Lake commences. Hadsar is situated 17 kms from Bharmour at an elevation of 2317 mts above sea level. Hadsar is the endpoint of the road. Simple accommodation facilities are available at Hadsar. The place is flooded by tourists during Manimahesh Yatra.

The best period to visit Bharmour is between July and September.

Bharmour accommodation
There is PWD Rest-House and a Lodge for accommodation. A number of hotels, sarais and a mountaineering hut with dormitory facility for 26 persons is coming up at Bharmour. There is a regional centre of Mountaineering Institute, Manali, where courses are conducted by qualified trainers. Bharmour is also known for its delicious apples and local blankets.

By Road: Bharmaur is well connected by motorable roads with major towns of Himachal Pradesh like Chamba, Kangra, Dharamshala, Dalhousie etc. Bharmour is situated 65kms from the town of Chamba and 80kms from Dharamshala at an elevation of 2195mts above sea level. Buses and taxis are available to Bharmaur.

Fri Jan 26 , 2018
Share on Facebook Tweet it Pin it Share it Email Chakrata is elevated at 2,270 mts above sea level in the Dehradun district of Uttarakhand state. It is a cantonment area situated between Yamuna and Tons River. It is an exquisite place situated amidst coniferous, rhododendron and oak trees. The […] 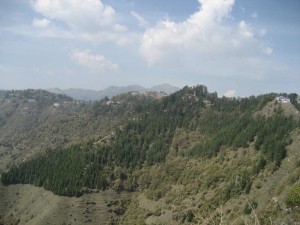