Golden Temple Amritsar, famously known as Shri Harmandir Sahib is one of the most sacred pilgrims for Sikhs all over the world. Named after Hari meaning God, the temple is coated with Gold all over. Originally the location of this temple was a small lake in the deep forest where first Lord Buddha spent some time and then first Sikh Guru, Guru Nanak DevJi meditated here for years. It is believed that Golden temple Amritsar is not just of significant importance to Sikh faith, but it also combines Hindu, Muslim and European design principles. 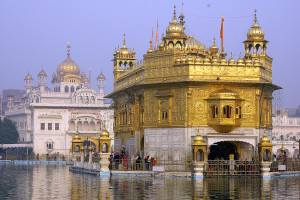 The temple has in all four entrances that welcome people from all walks of life irrespective of their caste, colour, creed and religion. A three story communal open kitchen serves almost fifty thousand meals per day and is known as Guru Ka Langar. Apart from this, there are three trees surrounding the temple area that silently watched the epic events and are still standing firm.

Golden Temple History
It is believed that Third Guru, Guru AmardasJi envisioned the lake as the centre place of prayers, where he also built some space for worship. This space was in close proximity to the pool which contained water rich in natural healing abilities. He also gave some herb to second Sikh Guru, Guru Angad DevJi, which helped in curing his skin ailment and so he named the tree as DukhBhanjani Beri – tree that drove out sorrows.

In the year 1573, the holy water tank, Amrit Sarovar was constructed and city of Amritsar was born. After almost a decade, Guru ArjunDevJi laid the foundation stone of Golden temple. Then in the year 1604, Guru Arjun DevJi oversaw the completion of Sri Harmandir Sahib and along with Bhai GurdasJi, he finished the first volume of Adi Granth, Guru Granth Sahib Ji. In the same year,Adi Granth was installed in the temple and Baba BudhhaJi was appointed as the first Head Granthi at the temple. 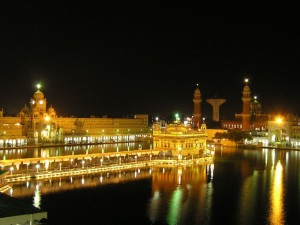 The daily schedule at Golden Temple Amritsar varies from month to month. From February to September, the singing Hymns called Kirtan starts at 2:00 am in the morning and after an hour later, it is followed by Asa Di War. Guru Granth Sahib Ji is carried on a palanquin from Akal Takht to temple’s sanctum sanctorum. During October to January, Kirtan starts at around 3:00 am followed by Asa Di War at 4:00 am and then Hukamnama, that is, Guru’s command is read to the congregation. Evening Prayer, Rehras Sahib starts at the sunset and the last Hukamnama takes places at around 8:30 pm.

Amritsar Accommodation
Inside the temple complex, there are hostel style living quarters that are available for free of cost and for low cost, as well. Inquiry about the rooms can be done through websites, but online booking in advance is not available. Temple complex includes Sri Guru Ram Das Niwas which is a free hostel for pilgrims, Guru Nanak Niwas, Guru Hargobind Niwas, Guru ArjanDev Niwas, Mata Ganga Ji Niwas and Akal Rest House. Out of these, Guru ArjanDev Niwas includes 19 air conditioned double bed rooms that area available for Rs. 50 per day.