Pilgrims visit Kedarnath Dham after their visit to Yamunotri and Gangotri. It is believed that the pilgrims cleanse their body and soul after visit to both of these places. And after that getting to visit the Kedarnath Dham is a real treat. According to custom, one has to worship Lord Shiva water from the Ganga. So, the pilgrims who have visited Gangotri have to carry some along with them. This Dham is believed to be the seating place of Lord Shiva. The temple stands at the top of the river Mandakini with an altitude of 3584m. It is here only Lord Shiva condemned the Pandavas with the offense of killing their cousins, Kauravas.
One can find several pools or tanks known as Kunds. The most important of them are Shivkund, Hanskund, Retkund, Udakkund and Rudhirkund. It is a strong belief that the Bhaironathji temple, situated not far away from Kedarnath, protects it from vices at the time when the temple is closed. 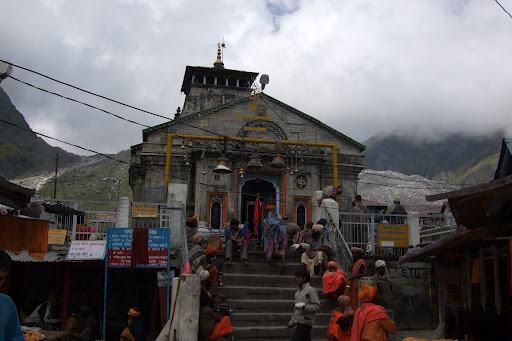 The temple is kept close during the winters because it gets covered with snow making impossible for the pilgrims to enter. If one reaches the temple on a moonlit night then he can be a witness to the snowed peaks shimmering like hundreds of silver summits on the top of the sparkling mountains. People even believe that he one who dies here becomes one with the Lord Shiva. As the legend says, the Pandavas had to travel through the Mahapanth in order to request the blessings of Lord Shiva for killing their own cousins. But the Lord was not willing to appear before them and lived disguised in Guptkashi. But the Pandavas could detect him. When Shiva was reveled, he started tumbling to Kedarnath in the form of a bull towards the Pandavas. He submerged in the ground leaving his hump out. It is this rock which is worshipped in the temple. Seeing the Pandavas decided, he appeared before them and pardoned them from their sin.

There are four other forms in which Shiva is worshipped. These take their exterior from the various parts of the body like the arms at Tungnath, the naval at Madmaheshwar, the face at Rudranath and the hair at Kalpeshwar. These along with the Kedarnath are called the Panch Kedars.