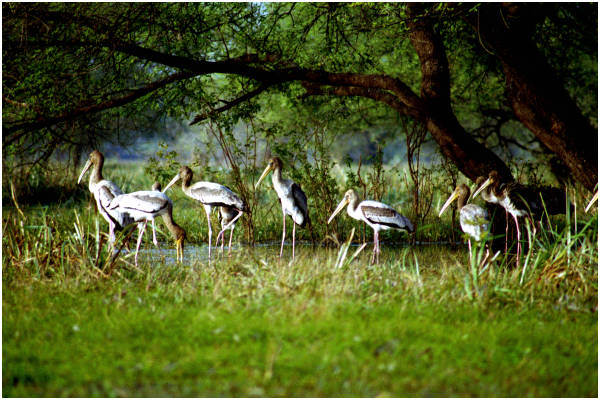 One of the finest bird parks in the world, Bharatpur Bird Sanctuary (Keoladeo Ghana Natiuonal Park) is a reserve that offers protection to faunal species as well. Nesting indigenous water- birds as well as migratory water birds and waterside birds, this sanctuary is also inhabited by Sambar, Chital, Nilgai and Boar.

More than 300 species of birds are found in this small wildlife park of 29-sq-kms of which 11-sq-kms are marshes and the rest scrubland and grassland. Keoladeo, the name derives from an ancient Hindu temple, devoted to Lord Shiva, which stands at the centre of the park. ‘Ghana’ means dense, referring to the thick forest, which used to cover the area. 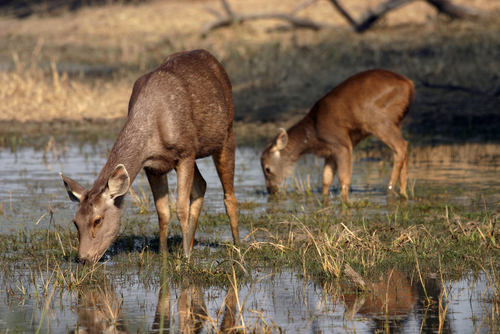 While many of India’s parks have been developed from the hunting preserves of princely India, Keoladeo, popularly known as Bharatpur Wildlife Sanctuary, is perhaps the only case where the habitat has been created by a maharaja. In earlier times, Bharatpur town used to be flooded regularly every monsoon. In 1760, an earthen dam (Ajan Dam) was constructed, to save the town, from this annual vagary of nature. The depression created by extraction of soil for the dam was cleared and this became the Bharatpur Lake.

At the beginning of this century, this lake was developed, and was divided into several portions. A system of small dams, dykes, sluice gates, etc., was created to control water level in different sections. This became the hunting preserve of the Bharatpur royalty, and one of the best duck – shooting wetlands in the world. Hunting was prohibited by mid-60s. The area was declared a national park on 10 March 1982, and accepted as a World Heritage Site in December 1985. 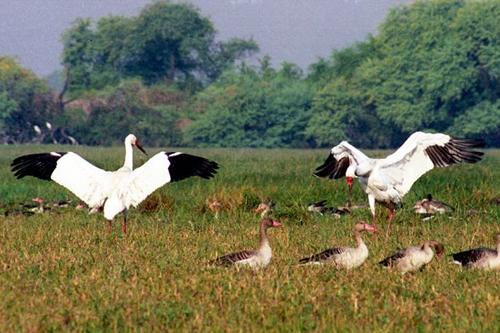 The major attractions of tourists visiting the park are the numerous migratory birds, who come from as far away as Siberia and Central Asia and spend their winters in Bharatpur, before returning to their breeding grounds. Migratory birds at Bharatpur bird sanctuary include, several species of Cranes, Ciconia episcopus, Pelicans, Geese, Ducks, Eagles, Hawks, Shanks, Stints, Wagtails, Warblers, Wheatears, Flycatchers, Buntings, Larks and Pipits, etc.

There are well-defined forest trails, which can easily be covered on foot or on a cycle or you can also hire a rickshaw that are available on hire. Rickshaw pullers have been trained by the park management in bird watching and are quite knowledgeable. Boats are also available on hire. A early morning boat trip or a late evening one is quite a rewarding experience to check out the hidden surprises of Bharatpur.

Other nearby tourist attraction
Bharatpur Palace :
Not far from the museum is the Bharatpur Palace, an marvellous structural blend of Mughal and Rajput architecture.
Lohagarh Fort :
The invincible Lohagarh Fort, which remained unconquered despite several attacks by the British regime.
Deeg Palace :
Situated just 32-kms away from Bharatpur is the Deeg Palace. A strong and massive fortress, Deeg Palace was the summer resort of the rulers of Bharatpur and houses numerous beautiful palaces and gardens.