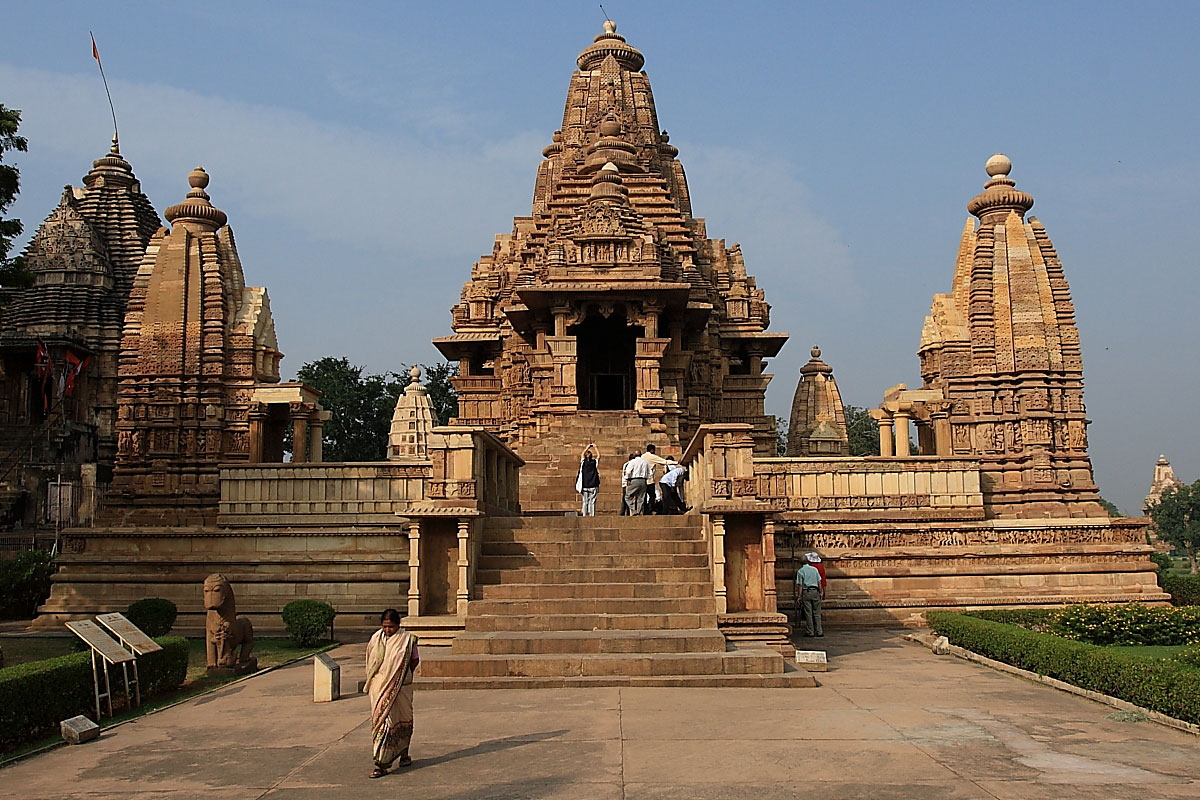 Khajuraho is a small village nestled in the timbered plains of the Indian state of Madhya Pradesh. Khajuraho is a famous tourist destination known for its temples. Traditionally believed to have been built by the Chandela rulers during 950-1050 A.D, Khajuraho Temples are listed among the world heritage site by UNSECO.

The Khajuraho temples are famous for their rare art work which can be associated with any temple art. They bear erotic images which have gained popularity around the world. The predominant religious influence in the temple is that of Jainism and Hinduism. The construction of the Khajuraho temples can be credited to the Chandela Rajputs of that period and the temples were constructed between 950 to 1150; a period of around 200 years. The Muslim invaders from central Asia caused some damage to the Khajuraho temples and the damages can be seen even today. The temple art work is different from other temples since it depicts sexual activities of people during the medieval period. This feature is a rare art work which can be seen only in the Khajuraho temples. The architecture which has been used in this temple corresponds to a north Indian architectural style known as the Shikhara style. The sculpture works are realistic in nature and are under extensive research even today. Southern, Eastern and Southern are the three main parts in which the temples can be divided. Sandstone was used or the construction of Khajuraho temples.

They were placed together using precisely worked out joints. The entire thing works upon balance due to gravity. The giant columns and mega structures were made from megalith which are very heavy and weigh up to around 20 tons each. The erotic art which has been depicted outside the walls of the temple comprises of sexual undertones. The everyday activities of people during Medieval India have also been depicted through the art work. The properties of the soul have been shown through special art works which is a rare sight. They have depicted the soul as a pure entity which remains unaffected by worldly desires related to sexual activities. However the sexual activities which have been shown do not depict any deities engaging in sexual practices but they show only humans engaged in acts of sex. The temple is a combination of rare art and architecture along with a fixed undertone of religion.

The thing which is very uncommon about this place is the combination of sensuality and divinity; combined through art work. The tones of sexual nature are depicted on ordinary figurines and the deities have been kept away from it. The main deities of Khajuraho are Brahma, Vishnu and Maheshwar. These deities signify the entire life cycle of existence through creation, sustaining and destruction. The eternal images of love have made this temple a very famous one and it has been a topic of research work. The common behavior of human beings has been combined with the divine world and has resulted in the eternal art works of Khajuraho; mortal with time but eternal in beauty.

Travel Informations
By Air: Regular services link Khajuraho with Delhi, Agra, and Varanasi.
By Rail: The nearest railheads are Harpalpur (94 Km) and Mahoba (61 Km). Jhansi (172 Km) is a convenient railhead for those traveling from Delhi and Chennai; Satna (117 Km), on the Mumbai-Allahabad line of the Central Railway for those coming from Mumbai, Kolkata and Varanasi.
By Road: Khajuraho is connected by regular buses with Satna, Harpalpur, Jhansi and Mahoba