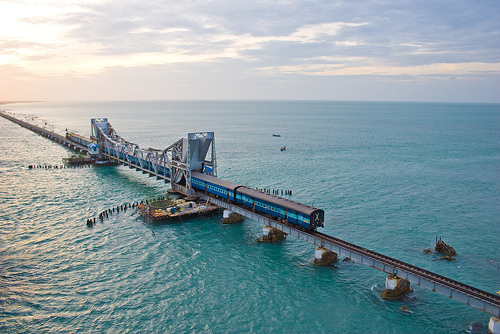 Rameshwaram travel guide – places to visit in Rameshwaram
Rameshwaram is located on an island separated from mainland India by the Pamban channel and is less than 40 kilometers from the Jaffna Peninsula, Sri Lanka. Together with Kashi, it is considered by Hindus to be one of the holiest places in India to Hindus. Hence, it is a bustling pilgrim centre.

It is situated in the Gulf of Mannar at the very tip of the Indian peninsula. Once you’ve decided on your budget, you will want to visit this beautiful region of India. According to legends, this is the place from where Lord Rama, built a bridge Ram Setu(also known as Adam’s Bridge) across the sea to Lanka to rescue his consort Sita, from her abductor, Ravana. This is also the place where Rama worshipped Shiva to be absolved of the sin of killing Ravana. Both the Vaishnavites and Shaivites visit this pilgrimage centre which is known as the Varanasi of the south.

Rameshwaram is significant for the Hindus as a pilgrimage to Benaras is incomplete without a Pilgrimage to Rameshwaram. The presiding deity here is in the form of a Linga with the name Sri Ramanatha Swamy, it also happens to be one of the twelve Jyotirlingas. The masterpiece of Dravidian architecture boasts of the largest temple corridor in India. Different rulers built the Ramanatha Swamy Temple over a period of time starting from the 12th century. The temple comprises forty wells where the taste of the water of each well is different from the other.

The grandest part of the temple is the 1219 m pillared corridor consisting of 3.6 m high granite pillars, richly carved and well proportioned. The perspective presented by these pillars run uninterruptedly to a length of nearly 230 m.

According to the Puranas, upon the advice of Rishis (sages), Rama along with Sita and Lakshmana, installed and worshiped the Sivalinga here to expiate the sin of Brahmahatya (killing of a Brahmin) (Ravana was a Brahmin the great grandson of Brahma). Rama fixed an auspicious time for the installation and sent Anjaneya to Mount Kailas to bring a lingam. As Anjaneya could not return in time, Sita herself made a linga of sand. When Anjaneya returned with a linga from Mount Kailas the rituals had been over. To comfort the disappointed Anjaneya, Rama had Anjaneya’s lingam (Visvalingam) also installed by the side of Ramalinga, and ordained that rituals be performed first to the Visvalingam.

In Rameshwaram Temple, a spiritual “Mani Darshan” happens in early morning everyday. This “Mani” is made of “sphatik”[a precious stone] and in form of “Holy shivling”. according to ved this is “Mani” of “sheshnag”.

Sethu Karai is a place 22 km before the island of Rameshwaram from where God Ram built a Floating Stone Bridge “Ramasethu” till Rameshwaram that further continued from Dhanushkodi in Rameshwaram till Talaimannar in Sri Lanka as mentioned in the great Hindu epic RAMAYAN. The ruins of the Ramasethu are submerged under the sea as shot from Gemini 1 satellite of NASA in 2004. 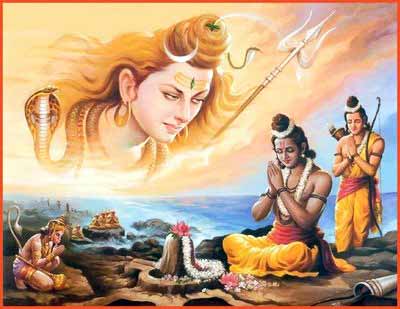 Rameshwaram, the holy town has associated with the Mythological tales of Rama. The name of the city itself has been derived from Rameshwara, which was an ‘Iswara’ that was installed by Lord Rama. According to the Puranas, Rama along with Sita and Lakshman came to the town to perform a sacred Puja in order to do penance for the sins for Bhramahatya. It is believed that Rama had fixed an auspicious time for conducting the Puja, and sent Anjaneya to get the lingam from Mount Kailash. However, Anjaneya could not return in time. Thus, Sita caricatured a lingam of sand and they performed the Puja on time.

After successful completion of Brahmahata Dosham ceremony, Lord Rama along with Umadevi announced that anybody who takes bath in the Danudkodi and prays to the Shivalingam, will be known as Ramalingam. Hence, the place came to be known as Rameshwaram after the deity called Ramanathswamy.

When Anjaneya returned with lingam, he found that the Puja was nearly over and in anguish tried to remove the sand lingam from his tail. In spite of many attempts, he was not able to do so and realized the divinity of Sita. Then Ram ordered him to place the lingam that he brought on the northern side of Ramalingam. After it Rama also ordered that people should worship the Ramalingram, only after worshipping the lingam that was brought and installed by Sri Anjaneya.

Sri Ramanathaswamy Temple – this temple situated near the sea on the eastern side of the island is renowned for its magnificent prakaras or corridors with massive sculptured pillars on either side. 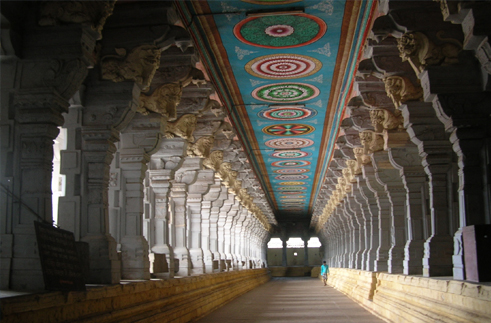 The longest corridor in the world is here and it is 197 metres long from East to West and is 133 metres wide from South- North. The temple has a Gopuram 38.4 metres tall. Different rulers built the temple as it stands today, at different periods from the 12th century A.D. Pooja is performed for an hour early morning daily to the Spadikalingamthat was given by the Shankaracharya to this temple.

Agnitheertham – Sri Ramanathaswamy temple faces east. The seashore, about 100 meters from the main entrance of the temple, is very calm and therefore ideal for bathing. The water at this place is considered sacred and known as Agni theertham. Pilgrims perform poojas in honor of their ancestors at this seashore.

Gandamadana Parvatham – is a hillock situated 3 km away and is the highest point in the island. Here one can see the imprint of Lord Rama’s feet on a chakra. The entire island of Rameswaram is visible from this point.

Satchi Hanuman Temple – is considered to be the place where Hanuman delivered the good news of finding Sita to Rama with satchi or evidence, Choodamani or the jewel that belonged to Sita. Situated 3 km from the main temple, on the way to the Gandamadana Parvatham.

The Five-faced Hanuman Temple – (2 km from themain temple) – the deity of Hanuman drawn withsenthooram. Idols of Lord Ram, Sita and Hanumanbrought from Dhanushkodi during the 1964 cyclone were placed here. Thefloating stone, used to build theSethuBandanamor the bridge between India and Lanka can be found inthis temple.

JadaTheertham – (about 3.5 km from Rameswaram on the Dhanushkodi road) – legend has it that Lord Rama, on his way back after killing Ravana, Worshipped SriRamalinga (believed to be installed by him). Before doing so, he washed his hair(Jada) in this theertham to purify himself.

Dhanushkodi (18 km) – the southern tip of the island, Dhanushkodi was completely washed away by the 1964 cyclone. This is a strip of land about one km wide and 18 km long on the eastern end of Rameswaram island. On one side are the waters of the Indian Ocean and on the other the waters of the Bay of Bengal. The two seas otherwise known as Ratnakaran and Mahodadhi with their confluence is shaped like a bow while the strip of land resemble an arrow poised for release. Devout Hindus consider the Adi Sethu or the arrowhead, a sacred place to perform religious rites. It is also place worth visiting for its scenic beauty and bird life.

HOW TO REACH Rameshwaram

By train – Connected with all major cities like Chennai, Madurai, Coimbatore, Karaikudi, Trichy, Thanjavur and Palghat.

A Complete Guide to the Kingdom of Lord Krishna: Dwarka