Sultanpur National Park is located in Gurgaon District, Haryana, India. It has an area of 1.43 square kilometres. It is a protected area where over 250 species of birds have been sighted. Sultanpur area on the Farukhnagar Gurgaon road was a low lying marshy area which used to get inundated during monsoons.

The collected brackish water attracted a large variety of animals and aquatic plants which in turn attracted migratory as well as a variety of resident birds. Earlier this was a favourit hunting grounds of the rich and famous around Delhi and the rulers of the small principalities in the area excelled in the sport of waterfowl hunting. Dr. Salim Ali, the doyen of Indian Ornithology is largely responsible for converting this hunting grouonds to a Bird Sanctuary. He was a frequent visitor till the last days. It was officially declared a Bird Sanctuary in 1971, thanks to the keen interest of Dr. Ali. In 1991, the Sanctuary was upgraded into a National Park.

Tropical. Hot summers and chilly winters. The monsoon hits Sultanpur in July and continues till mid-September 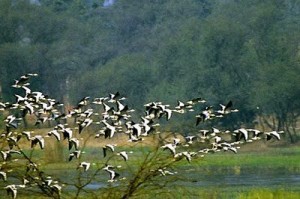 Migrants includes almost all common ducks who visit Northern India, including, Teal, Gaganey, Northern Shoveller, Pintail and Brahminy Duck. Various species of Storks and ibis as well as Spoonbills are also commonly seen in the park.

The Sanctuary has a large number of resident Neelgai(Boselaphus tragocamelus Pallas) besides some jackals, porcupines and mongooses.

Between October and March. During winter, the chances of sighting the wildlife are more.

HOW TO REACH SULTANPUR NATIONAL PARK

Sultanpur is 47 km from Delhi and 16 km from Gurgaon. Delhi has the nearest airport. Gurgaon has a railway station and Metro Railways is likely to connect Gourgaon with Delhi soon. Bus service from Delhi to Gurgaon is frequent and convenie

The Haryana Tourism Corporation runs a tourist lodge inside the park with air-conditioned and general rooms. Facilities include a restaurant, bar and cottages. Rates vary from Rs. 800 to Rs. 1,200 for air-cooled and air-conditioned rooms. Or, stay in Delhi or Gurgaon and drive down to Sultanpur.