Hampi is a historic and religious place in India, located within the ruins of Vijayanagara Empire. It covers more than 25 square kilometer area. Here you can find palaces, temples, ancient monuments, aquatic structures, market streets etc. Here you will mostly find the religion of Hindu, Islamic and Jainism. Hampi is a rural place, if we talk about the climate; the climate of Hampi is generally dry and hot. However you can find the cool temperature in the period of November to February. Hampi is open for visitors throughout the year, generally most crowds come during the summer and rainy seasons. 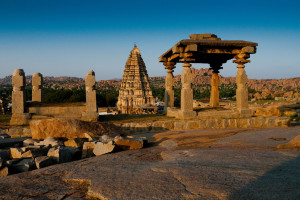 If you are planning to tour of Hampi in summer then you should come along wearing loose cotton clothes, hat and carry plenty of drinking water. In summer you will feel much quietness and peaceful mind. But in rains it is quite bad because most of the spots of Hampi are open areas and some areas are restricted to visit in the rainy season, so you have to waste your time mostly at your hotel room. On winter nights are cold and the day temperature is very nice to see for an outing. Here is the list of most popular places, these places should be visited by every visitor and the list is:

It is located on a river bank and this temple is dedicated to the Hindu God of Destruction. It is one of the oldest temples in India. In this place tourist and pilgrims both come and feel the beauty and charm of this temple. Here you can be the witness of Hindu religious functions. 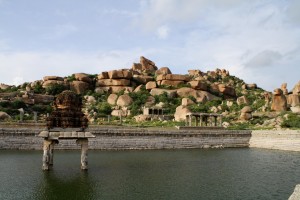 This hill is very beautiful which is covered through rocky sheets. This is a most important mythological place in the local folklore. Here you will find a large number of pre Vijayanagara temples which are located on this hilltop. These temples show the density of the temples and the importance of this place.

Royal Enclosure
This is a sprawling area and it is the seat of the erstwhile king. Here the king used to watch the annual parade of imperial majesty & military from the Mahanavami platform. This area is full of underground temples, aquatic structure, palace bases etc. 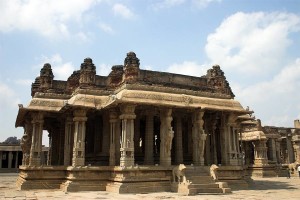 This temple is dedicated to Vittala, vital is a form of Lord Vishnu and this is the highlight of Hampi. In this temple you will find many halls and shrines, the pillars of this temple have animated carvings. You will experience many unexpected things like a set of pillars which is known as musical pillars, resonates when it is tapped. Here you will find very great environment and a wide chariot street of the temple.

Riverside trek Path
This is a path which connects the ancient Hampi market to the Vittala temple. This path has carved artifacts, numerous shrines, ruins of ancient structures all around. For instance, 1008 Siva ling carved in a matrix on a sheet of boulders at the river shore.

It is one of the ten incarnations of Lord Vishnu and this temple is dedicated to Lord Krishna. According to the Hindu mythology, Lord Krishna was known for His romantic encounters and political shrewdness. This temple consist the main shrine, shrines of the goddesses, the market street and the temple tank. This temple also has a series of pillars which are carved with mythical rampaging creatures.

Queen’s Bath
This structure was mainly constructed for courtly ladies or the king himself. It belongs to the royal area of the capital. The Queen’s Bath complex normally looks like an indoor aquatic complex. This was made very technically, in this structure a large veranda with protruding balconies all around faces the central pool. This is the typical example of Indo-Islamic hybrid architecture. 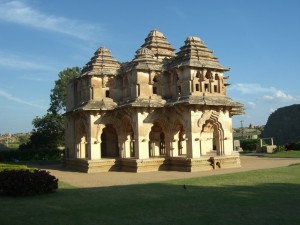 A delightful blend of Hindu and Muslim style of architecture, this palace features two-storeyed elegant pavilion situated in the ‘ladies’ section’ of the palace.

Hampi Bazaar:
Also known as Virupaksha Bazaar, is a market street located in front of the Virupaksha temple. Both sides of the street are lined with a series of old pavilions, wherein some of them are two storied.

Hazara Rama Temple:
The 15th century temple has finely carved basalt pillars in its hall depicting incarnations of Lord Vishnu while the sculptures on the exteriors of the hall depict main events from Ramayana. 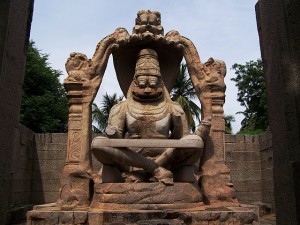 Lakshmi Narasimha also called Ugra Narasimha, it is a giant monolithic statue of the man-lion god, Lord Narsimha, one of the ten avatars of Lord Vishnu. This is the largest icon in Hampi depicted in a cross-legged seated position. 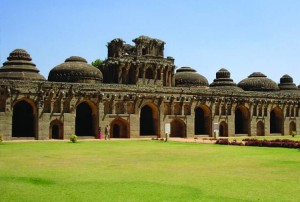 Elephant Stable was the shelter for the royal elephants in Hampi. This long structure is made of a series of chambers with domical roofs with each chamber being big enough to accommodate two elephants.

How To Reach Hampi:

By Air : Nearest airport is Bellary, 74 km from the city of Hampi.

By Train : Nearest railway station is at nearby Hospet, which in turn is well connected to and from Bangalore, Bellary, Gadag, Bijapur and Hubli-Dharwar.

By Road : Well linked to Hospet to Hampi by bus services, which is 350 km from Bangalore, daily buses from Bangalore to Hampi. Also some private operators who run buses from Goa and Gokarna.
.