Velavadar National Park is situated in the Bhavnagar District of Gujarat state, also known as Velavadar Black Buck Sanctuary is situated in the Bhal region of Saurashtra. Ideally set between two rivers, one of the main reasons for the rich soil found here, the park is located about 50 km west of the Gulf of Cambay.

Velavadar’s history dates back to the pre independence period when the place was a part of the princely state of Bhavnagar and the park used as a grazing ground for the Maharaja’s cattle. After independence, the population of blackbuck started to decrease and came down to a meagre 200 in 1966. It was then that the area of 8.9 sq. km was converted into a sanctuary. In 1972, the area was increased to around 34 sq. km and was accorded the status of a national park under the Wildlife Protection Act. A unique feature of the park is that it is the only tropical grassland in India to be given the status of a national park.

There are two gates with a road in between which leads to the park. The reception attached to the Kaliyarbhavan Forest Lodge is the place where the visitors pay the entry fee to the park. The park interpretation centre located at a short distance from here provides basic information about the animals and birds found in the area.

The fauna population of the park mainly includes Blackbucks, Wolves, Houbara bustard and Lesser Floricans, with foxes, jackals and Jungle Cats as the main carnivores species. Other species include wild pigs, hares and rodents, typical of the savannah type grasslands and thorn scrubs.

Among the avifauna family, Sandgrouse and larks are seen in fair numbers. According to Roger Clarke, the British harrier-expert, the harrier roost found at the park is one of the largest in the world. 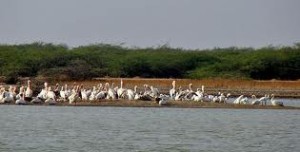 The ecosystem of the park houses four distinct habitats, grassland, shrub land, saline land and high tidal lands. One of the most thrilling sights in the area is the unusual mating rituals of the blackbuck, which involves a spectacular vertical leap of up to 2 mt by the male. Besides the blackbuck, other commonly found mammals include the Nilgai, Wolf, Wild Cat, Jackal, Indian Fox, Wild Boar, Porcupine, Hare and Rodent, while the reptile kingdom constitute of Saw Scaled Vipers, Common Cobra, Krait, Rat Snake and Sand Boa.

The park is home to over 187 species of birds including residents and migratory birds such as Harrier, Partridge, Pelican, Duck, Crane, Stork, Eagle, Sand Grouse, Lark and Lesser Florican.

Safaris : The jungle trail located in the park is a straight path with watchtowers dotted around it. The ‘wetland’, located just 3 km from the entry gate is an ideal spot to check out the wildlife. There are no safaris provided by the forest department, so your own vehicle is the only source of enjoying a ride around the park but be cautioned as animals cross the roads at all times, so be sure to drive slowly and safely.

Velavadhar is a great place for photographers with large herds of black bucks and flocks of birds presenting some great opportunities for photography. A drive or walk around the park can also be rewarding as chances of spotting the highly endangered florican and other feathered inhabitants, though slim, can not be ruled out.

Takhteshwar Temple : Situated just 2 km from Bhavnagar, the temple is dedicated to lord Shiva. It was built in the year 1893 by the local royal family.

Though the park is open throughout the year, the period between monsoon and winter (normally, mid-June to March-end) is considered to be the recommended period. The best time to visit Velavadar National Park is from December to March as many species of migratory birds which includes three species of Harriers, Lesser Florican, Eagles, Waders and many other water birds arrive to spend winter.

Road : The Nearest bus station is Vallabhipur (32 km). The park is about 72 Km from Bhavnagar, 315 km from Rajkot, 170 km from Ahmedabad 45 km from Vallabhipur Bus Stop (Bhavnagar District)