The Elephanta Caves, located at Gharapuri island, a confabulation of three small villages nearby Mumbai. These caves, a UNESCO world heritage site, are frequently visited by domestic and foreign travelers. The Elephanta island is located 10 km away from the Gateway of India at Mumbai. The Elephanta island was so named by the Portuguese, after the statue of an elephant near the landing area of the island. These rock cut temples dedicated to Shiva Mahadeva are rich in sculptural content. Motorboats take passengers from Appollo Bunder near the Gateway of India. 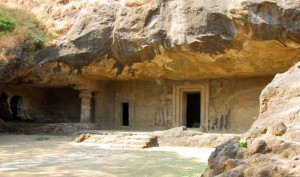 It was in 1819, a party of British Army Officers sat on a tiger hunt in the forest of Western Deccan and spotted their prey on the far side of a carved facade of a cave. On going further inside, the officers discovered a series of carved caves, each more dramatic than the other. It was later found out that the cave complex was lived continuously from 200BC to 650 AD. It was also found that there are about 30 caves , some of them half finished.

The origins of the temple caves, thought to date from about the 7th century, are obscure. It is known, however, that the island was originally called Gharapuri – the Portuguese renamed it Elephanta after they found a large stone elephant near their landing place. The figure collapsed in 1814 and was subsequently moved to the far-off Victoria Gardens and reassembled. 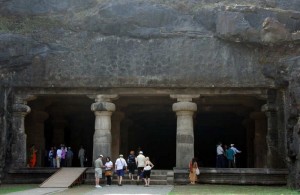 Shortly before the Elephanta temples were created, Mumbai had experienced the golden age of the late Guptas, under whom the arts flourished. Sanskrit had been finely polished, and Kalidasa and other writers had helped incite a Hindu religious revival under the court’s liberal patronage. Shaivism, the worship of Shiva, inspired the building of these temples. Many of Elephanta’s priceless statues were damaged or destroyed by the Portuguese, who apparently used the Hindu gods for target practice. There have also been reports of vandalism and carelessness by modern visitors, so take extra care to avoid damage during your visit.

Construction and The Caves
The entire cave temple complex covers an area of about 60000 squrare feet and it consists a main chamber and two lateral ones , courtyards and several subsidary shrines. Above the temple is the mass of natural rock.

There are three entrances to this temple. The ones on the east and the west marking the axis of the temple. A 20 pillared hall lines the axis, and on its western end is the cella in shich is enshrined a Shivalingam. The pillars consist of fluted columns standing on square bases, and are crowned with fluted cushion capitals. 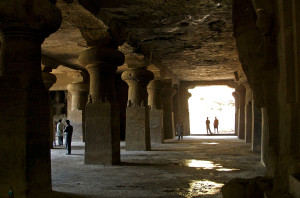 There are seven caves in total and the significant amongst them is the Mahesha-Murti Cave. On its very entrance, you will be welcomed by huge figures of doorkeepers which would really impress you at the moment. Within the temple, there is a huge hall with rows of pillars which appear to clutch the cave’s roof. Dedicated to Lord Shiva, the Elephanta Cave Temples boast of excellent sculptural content, which also symbolize Lord Shiva in his both forms – ‘lingam’ as well as His life-sized statue. In the main chamber, you can see the mysterious image of Trimurthi Sadasiva that is about 20 feet tall. 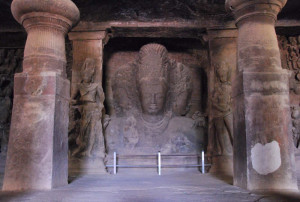 It represents the three-headed Lord Shiva, and renders Him as the Creator, the Preserver, and the Destroyer of the universe. The incredible sense of creativity of the architects and sculptors is noticeable in the serried of sculpted panels, set like tableaux on the walls. Each panel depicts Lord Shiva’s unpredictable nature, and miraculous interplay of light and shade, adds to the overall effect. Another colossal idol stands for Panchamukha Shiva and here the Lord is represented as the savior and bestower of blessings. This image is estimated to have been stood at the same place for possibly a thousand years and is regarded as the masterwork of Indian art. 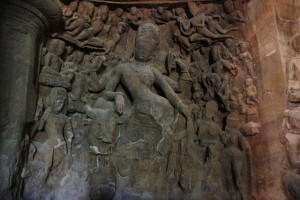 Spread over an area of 60,000 sq ft, the cave temple comprises a main chamber, two lateral ones, courtyards and additional shrines. Hewn from solid rock, Elephanta caves are adorned from inch to inch with beautiful reliefs and sculptures. The carved walls of the temple portray the scenes from the Indian mythology. Infact, the entire temple is said to have been erected by removing a rock itself. Majority of the rock surfaces have been over and done with, yet many are left untreated. Every year in February, this heritage site makes the venue for the much-awaited musical event called Elephanta Festival. To put succinctly, Elephanta Caves is a lovely place to get an insight of religious and cultural aspects of India.

Getting there:
Elephanta caves could only be reached on boat that leaves from Gateway of India in every 30 min from 9 am. It’s a 1 and half hour journey. This service is closed during the monsoon from June to September. Best time to visit Elephanta caves is during the month of February when Maharashtra tourism organizes a classical music and dance festival.

Sun May 14 , 2017
Share on Facebook Tweet it Pin it Share it Email Rangdum situated 3657 m above the sea level, Rangdum valley is an elliptical expanded plateau surrounded by colorful hills on the one side and glacier encrusted rocky mountains on the other. Rangdum Valley is located at the remotest and most […]